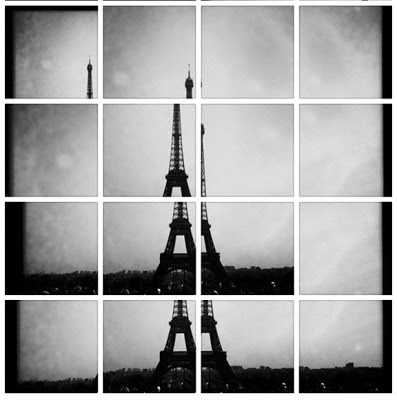 I've been to Paris four times.

The first time was in the summer of 1971 for 5 days on my way home from a summer in Israel.

Four years later, in 1975, upon my graduation from Brandeis University, I received a Thomas J. Watson Foundation Fellowship to study a new kind of printmaking that was being developed at Atelier 17, an old, established and, at that time, very important print shop in Paris. I found an apartment in the middle of Paris, the 5th arrondissement. When Allen, my then boyfriend, now husband, came to visit, he could touch both walls by standing in the middle and leaning to either side. But it had a shower, a very coveted item. I lived there for 7 months.

My third time in Paris was in 1983 when Allen and I went there as part of our honeymoon trip. We were there for a few days, maybe 4 or 5. I remember that we stayed in the Welcome Hotel, but not much else. My mind was on Italy, where we were headed, where we had headed in 1975, from Paris, on a train, for 26 hours, through the Alps, on a full moonlit night. My heart was not in it.

My fourth time was just recently. I spent a week there at the end of May, 2012. In 2008 my sister and her fiancé spent a year in Paris. They discovered they could live anywhere after they'd been together for about 6 months and decided they would live in Paris. Every May since, they have spent the month back in the city they love, and where they became fiancees. I was never able to join them as our mother's health was not good and I didn't feel comfortable with both my sister and I being out of the country at the same time. Our mom died on February 22nd. Her death, it turned out, meant that in May I could join Susan and Joel in Paris. It was only for a week, but it felt as momentous as my 7 months in 1975.

I never went to the Eiffel Tower those first three visits. I saw it, surely, from afar, from the top of Notre Dame, or from Montmartre. But for some reason, maybe the idea that I was too cool to go to the most cliched symbol of Paris, I didn't take the time to go up to it. Not so this time; I was determined to go, and on the 4th day of my week in Paris this May, Susan and I took the Metro ride to Bir Hakeim where we could view the tower. My sister prepared me for turning the corner of a building and seeing it in the distance but I was unprepared for what would follow. I burst into tears. It was incredibly moving, the power and beauty of the thing, the enormity of it, and the significance - all those visits rolled up into one sight, the missed viewings, at the cusp of my adulthood, at the beginning of my journey as an artist, at the beginning of my journey as a wife. My mom was gone and that fact allowed me to be here, looking at the symbol of a city that had drawn me in 4 times. In fact, I had no idea how significant, for it turned out that at that moment, and in two days I would discover, I had cancer. Again. But that's another story.

This piece is only a minute 14 seconds.

Posted by Tama Hochbaum at 8:49 AM